A project reborn, Elsie Owusu has restarted an idea for a gallery in Ghana.

Words by Elsie Owusu. Music by Chisara Agor. Cover Image: "Asante Trophy Head, Unknown artist, before 1874 (made), Ghana, gold, The Wallace Collection, London, image public domain. The mask is 20cm high, weighing 1.36kg of pure gold, and was seized by the British army from Kumasi, Ghana, in 1874. It was sold to Garrard & Co. Ltd, the Crown Jeweller, from whom Wallace bought it, together with Asante swords, knives and gold rings"

Return of the Icons 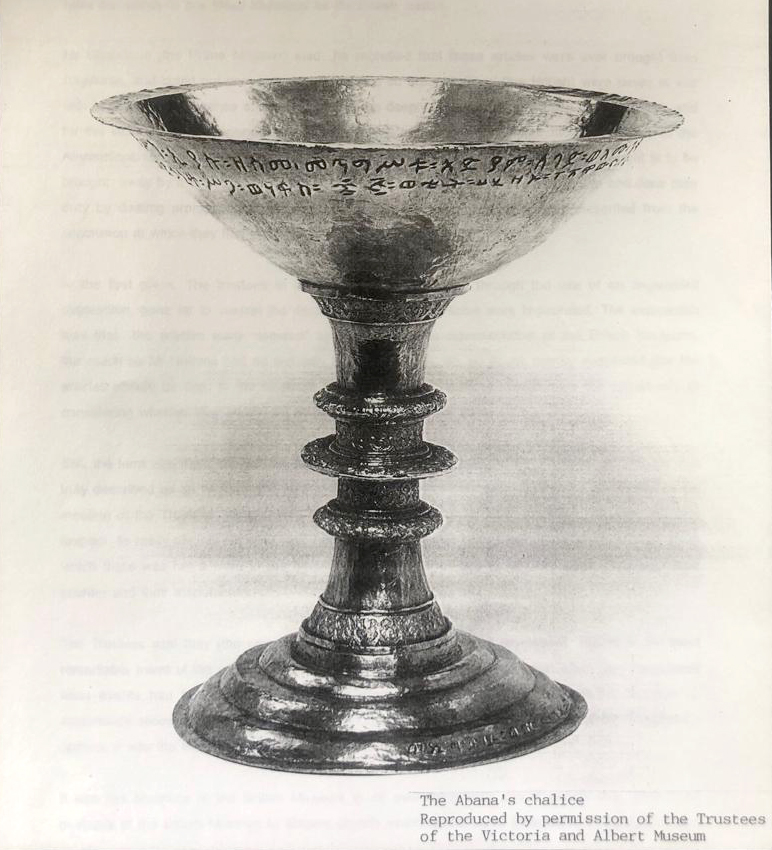 The Abana's Chalice
Reproduced with permission from the V&A

In 1996, as a young architect, I led a student design competition for the “Gallery for Returning Treasures (GRT)”. This ideas competition was co-sponsored by the Africa Reparations Movement (ARM) led by Bernie Grant MP and the Royal Institute of British Architects (RIBA).

Nearly 25 years later, the concept is reborn as a new gallery in Ghana, within the Kumasi City Hall Complex. In the “punitive campaign” of 1873-4, Sir Garnet Wolseley’s army raided Kumasi, ancient capital of the Ashanti kingdom in the then Gold Coast in West Africa. The British troops destroyed the city and looted large quantities of royal and sacred regalia. The present king HRH Otumfuo Nana Osei Tutu II has demanded the return of these treasures. Many bought at auction by British cultural institutions, including the V&A, are now the subject of the global movement for restitution

This movement has gained new significance with the resurgence of Black Lives Matter movement and are the subject of the “Return of Icons” report, published by Afford UK and the Sarr-Savoye report commissioned by President Macron of France. With the rise of BLM comes renewed interest in the history of the British Empire, slavery and colonialism, together with the reappraisal of the role of art and culture, in our human civilisations. “Rhodes Must Fall” reflects a new awareness of the importance of art in the public domain.

Gladstone speech on Ethiopian treasures: (excerpt)
"If these articles were acquired it should be upon the basis described by Lord Napier, with the view of their being held only until they could be restored. He hoped the hon. and gallant Gentleman would be satisfied with the undertaking that they would look into the matter, with the object of doing that which was fair and equitable he might have seemed to censure more severely than was justifiable some of those who had taken part in this matter; but such was not his intention." 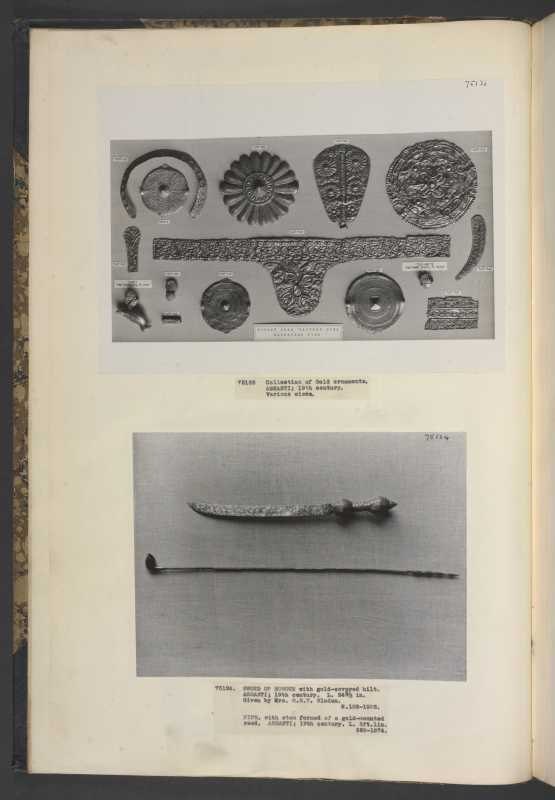 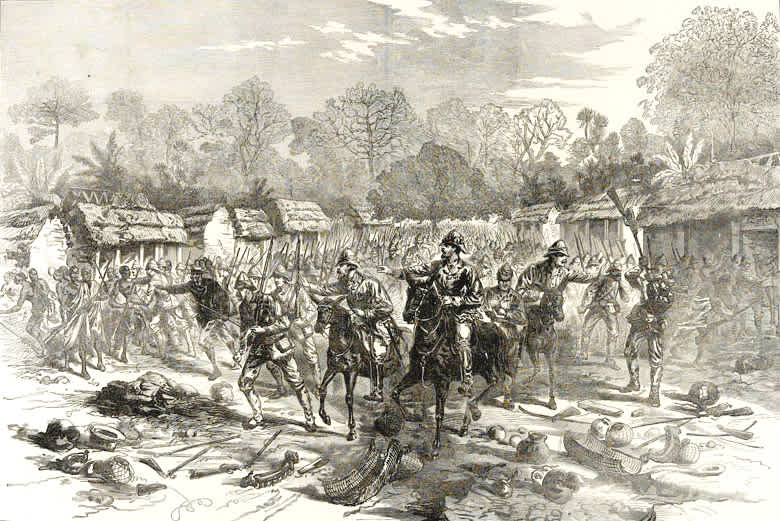 General Sir Garnet Wolseley's Asante "punitive expedition", 1874, in which Kumasi was destroyed and Asante treasures stolen to be sold at auction in London 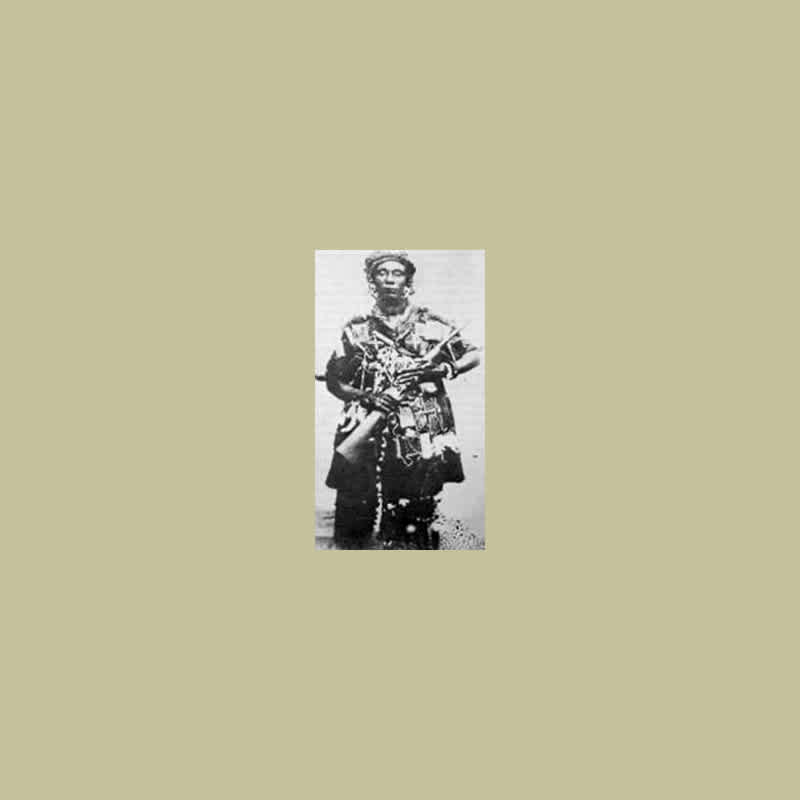 Yaa Asantewa, Queen Mother of Ejisu in the Asante Empire (now Ghana), War of the Golden Stool, 1900. Her costume includes pockets of spells.

The GRT competition brief stated that the building was “to be a staging post between the legacy of the past: the slave trade and colonialism; migration and under-development and the hope for the future, when the people of the African diaspora move beyond tutelage towards new pride and dignity”

Intended to be more than a gallery and museum- the GRT and its artefacts will be more than a conventional collection. The gallery is about display, data, information and academic exchange. Display is not only of the artefacts but, importantly, of the symbolism of their history, the British Empire dimension of the vast international trade in people and objects- as well as the increasing consciousness of the need for restitution, reconciliation and reparations.

In 1995, Liverpool dock was the site for the GRT complex. This location referred to the city’s history, as the hub of the slave trade, a distillation and condenser of its tragic essence. The building would hover, if only metaphorically, on the built edge between land and sea. The symbolic significance of this transition resonated with transitions from the horror of the past and pointed to the optimistic opportunities of the new millennium.

The architecture of the building was to reflect an aspiration towards a lightness of being, whilst pursuing the seriousness of visionary purpose. This was echoed in the choice of site at the edge of the River Mersey, at the end of the historic “Middle Passage”. Liverpool is a city whose former wealth was built on the slave trade. Its future well-being must, to paraphrase Martin Luther King, depend on a collaboration between the “....sons (and daughters) of former slaves and those of former slave owners...” 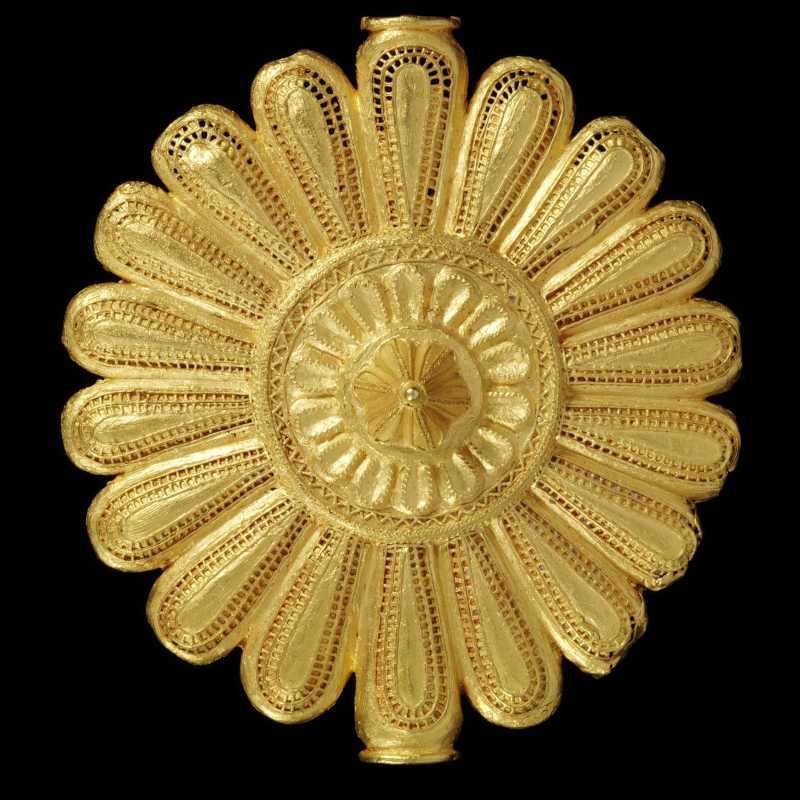 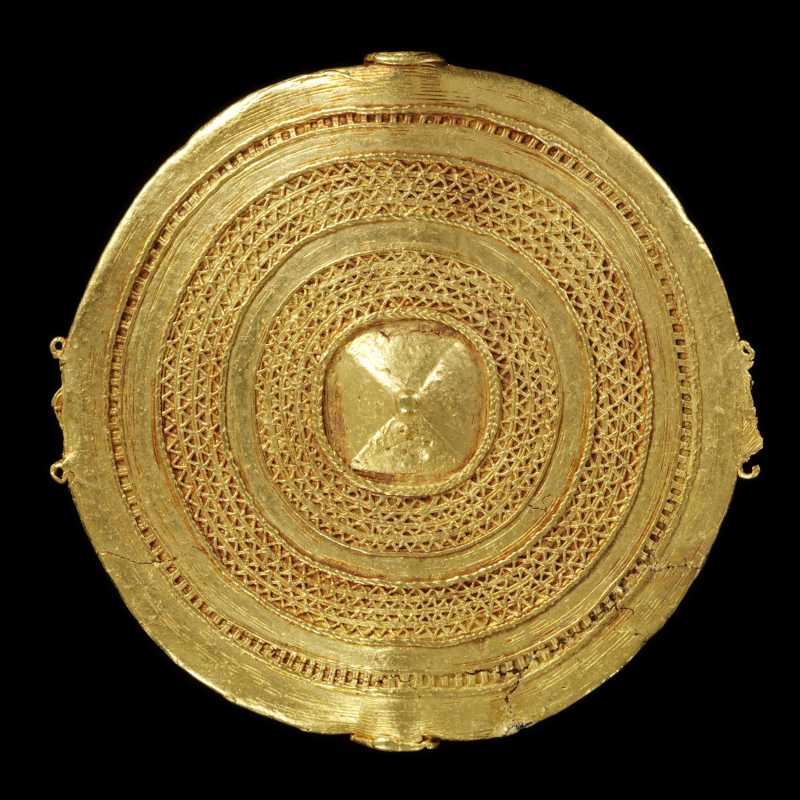 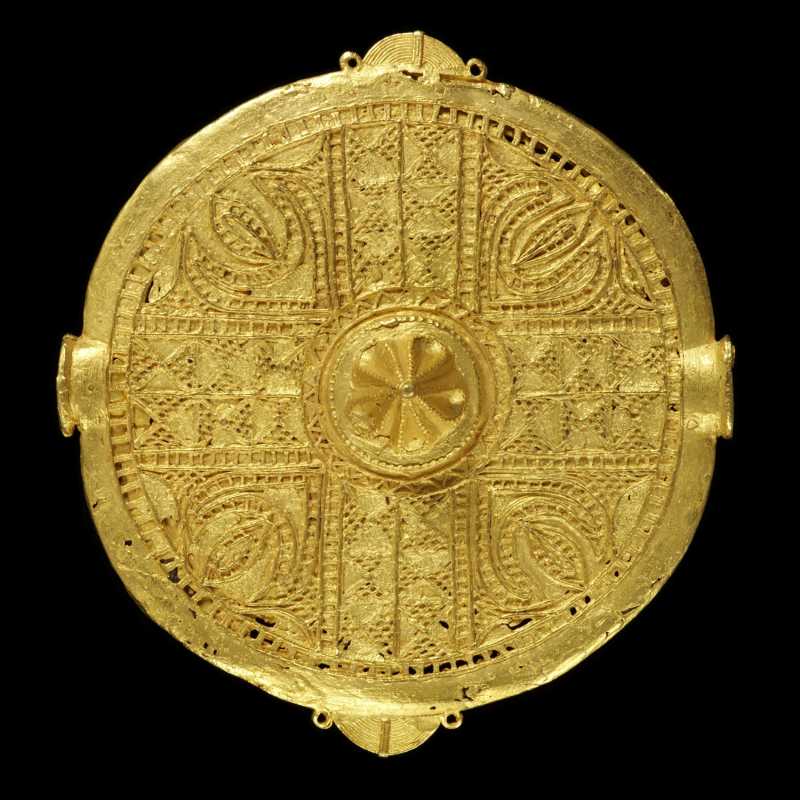 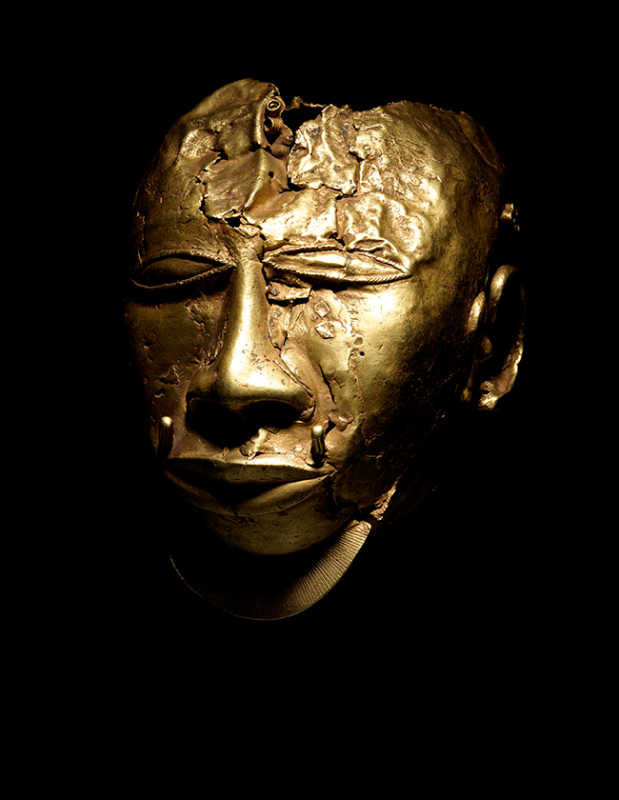 One of the largest historic gold objects from Africa outside Egypt, this trophy head was made in the West African state of Asante, in present-day Ghana. The Asante people controlled extensive gold resources and were renowned for the items they made from this
precious metal. The head is among the most important and famous works of Asante art, and depicts a defeated enemy leader. It would have been attached to a ceremonial sword by the loop under its chin.

The head was taken from the Asante ruler’s palace in Kumasi by British forces during the Anglo-Asante war of 1873–4. It was sold to Garrard & Co. Ltd, the Crown Jeweller in London, from whom Wallace bought it in 1874 along with other Asante objects displayed
in this case. 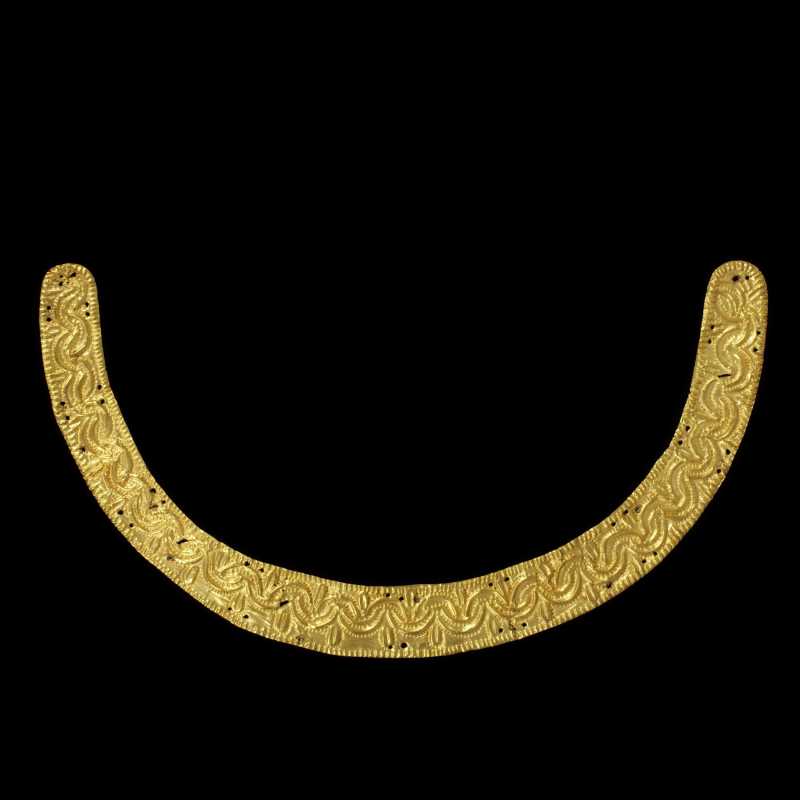 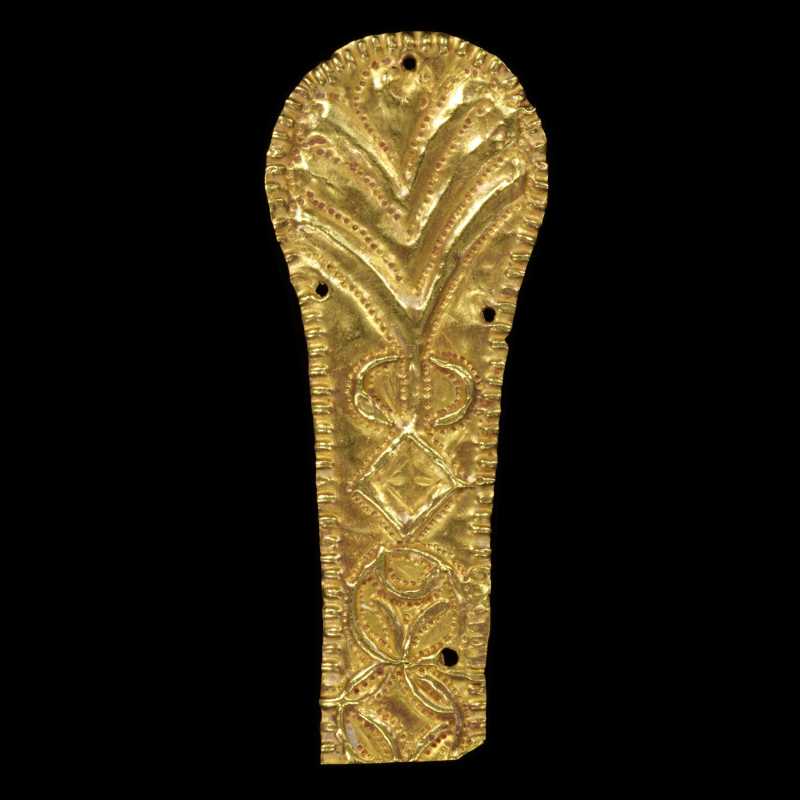 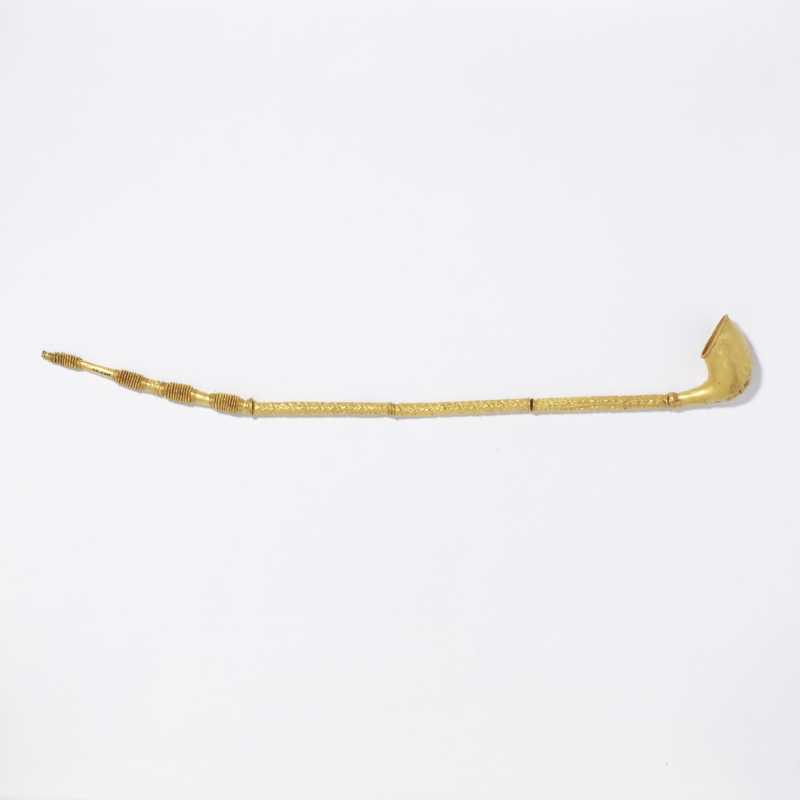 The Abana's Crown
Reproduced with permission from the V&A museum

Reborn in Kumasi as part of the Kumasi City Hall Complex, the new GRT deals simultaneously with questions which touch on notions of dis-settlement and re-settlement. The artefacts, taken from their original use-in-culture, are currently viewed in conditions of alienation as the bounty and treasure of art- the rich pickings of colonialism. Under the Return of Icons programme, many treasures will be returned to original homes- places and locations which may have undergone radical social and political change.

The new, visionary brief of this building encompasses these complex issues and proposed a simple, beautiful temporary home for the study and display of historical artefacts. Located in Kumasi, which was pivotal to the slave trade, colonialism and the struggle against the British Empire, the GRT and its allied educational and research institute is to be a place where objects speak to one another and to their multiple audiences- locally, nationally and internationally. It will also create an environment where, above all, people of all races and cultures may recognise and reflect upon the history of kidnap and plunder, whilst appreciating the triumph of human endeavour and resilience - as well as the beauty and power of the artefacts

In summary, the architecture of GRT is to make a powerful statement of resilience, reconciliation, hope and reparations. In addressing the brutality of the past, the spaces will offer a sense of confidence and the promise of wellbeing in anticipation of the return of icons to the continent of Africa. This is the central purpose of the building.

In 2020, the brief and design are re-born and re-envisioned as the new GRT,located within the Kumasi City Hall Complex. There are many dimensions to which this new brief relates:

firstly, to research in field of Black History in Africa ;
secondly, to establish a gathering place for commemoration if loss, celebration of resilience and community gathering;
thirdly, to study, data collection cataloguing and preparation for the curation and care of the objects and artefacts.

Most importantly GRT- and the future Institute will act as a centre of excellence on the African Continent- a catalyst for lobbying for and, if necessary, raising funds for the purchase of treasures and artefacts in order that they may be returned to their countries of origin.

Early European visitors to Ghana, West Africa, described dazzling displays of court regalia at the court of the Asantehene, the ruler of Asante state. The region’s natural gold resources had made the Asante wealthy and court regalia, which included textiles (kente), ivory and gold, reflected high levels of skill and technology.

Following Asante efforts to protect a coastal trading outlet, British forces invaded the state capital Kumasi on 4 February 1874. The Asantehene, Kofi Karikari, fled leaving behind much precious regalia, which was captured and later sold at auction at Garrard’s, the London crown jewellers. The Victoria and Albert Museum’s accession registers record the purchase of this and twelve other items of Asante gold and silverware from Garrard’s on 5 June 1874. 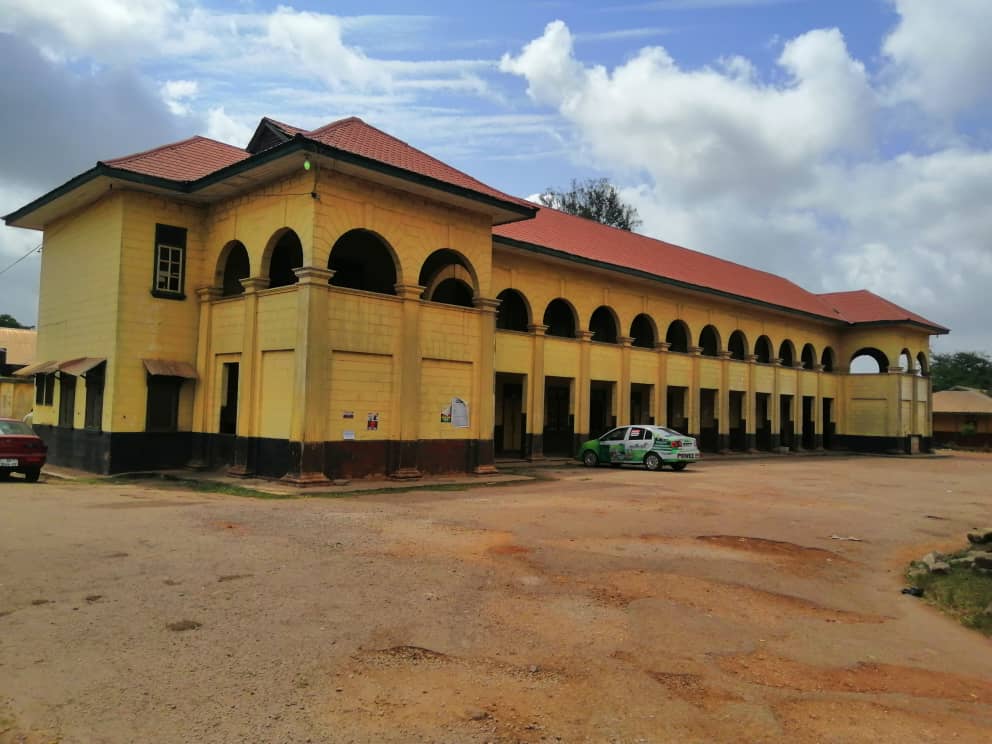 Ex-colonial building in Asante regional capital of Kumasi, Ghana, designed by the reforming Colonial Governor Sir F. Gordon Guggisberg (appointed Governor of the Gold Coast in 1919), has now been offered to Elsie Owusu as a potential building for "A Gallery for Returning Treasures"

THE COMPOSER + THE ARCHITECT

Architect and Specialist Conservation Architect, interior and urban designer, Elsie has a wide expertise in transport and infrastructure, as well as the issues facing emerging economies. Passionate about contemporary architecture and city planning, she is particularly fascinated by their relationship to the arts in general, and the specific work of individual artists.

Eminent artist Sir Peter Blake, amongst others, has collaborated with her on a number of projects from jewellery to housing. While a partner at Feilden+Mawson LLP, Elsie was responsible for the masterplan for Green Park Station in London, as well as being lead architect for arts and interiors on the UK Supreme Court's refurbishment. She has completed designs for public transport systems in Lagos, Nigeria and Accra, Ghana.

Previously a board member of Arts Council England and the National Trust of England, Elsie is currently serving on the boards of the Architectural Association, the UK Supreme Court Arts Trust and the Royal Institute of British Architects (RIBA) Council. She is also Vice-Chair of the London School of Architecture.

Elsie is also director of ArchQuestra, which provides the best of British architecture, art and engineering to support emerging economies.

A long time director of JustGhana, a UK company dedicated to investment in the people and culture of Ghana, Elsie is currently designing a range of Ghanaian ethical gold jewelry with prominent UK artists.

Chisara Agor is an inter-disciplinary artist from Peckham, London. Her works spans the music, theatre and art world grounded in her philosophical practice and desire to create work that speaks and engages with the wider community and human condition.  She has performed in the UK and abroad appearing on stages such as the Southbank Centre, Jazz Café and The Roundhouse London.

Chisara has created compositions for Musicity Global, You Should See the Other Guy theatre company, Talawa theatre and is a Spitalfields Music Open call artist which supports highly talented, emerging composers. Chisara is the recipient of several awards including the MGCFutures Bursary to develop her new musical 'The Garden' which seeks to shed a light on the necessity of social housing through the eyes of a young girl and the 2020 Help Musicians Do It Differently Fund. Chisara’s inter- disciplinary practice is informed by her performance/music background and her ability to imagine and critique worlds while bringing uncommon and magical narratives to the fore.