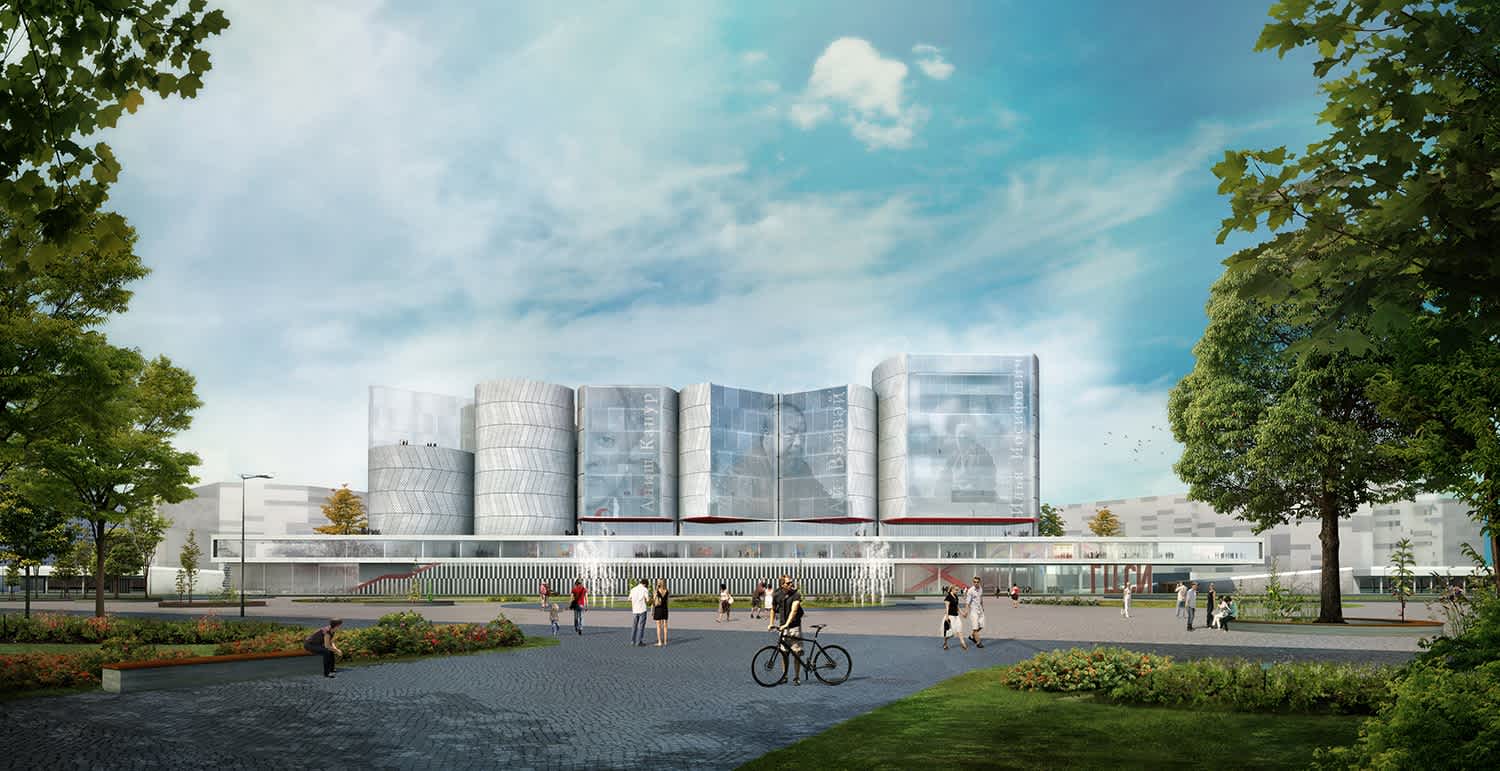 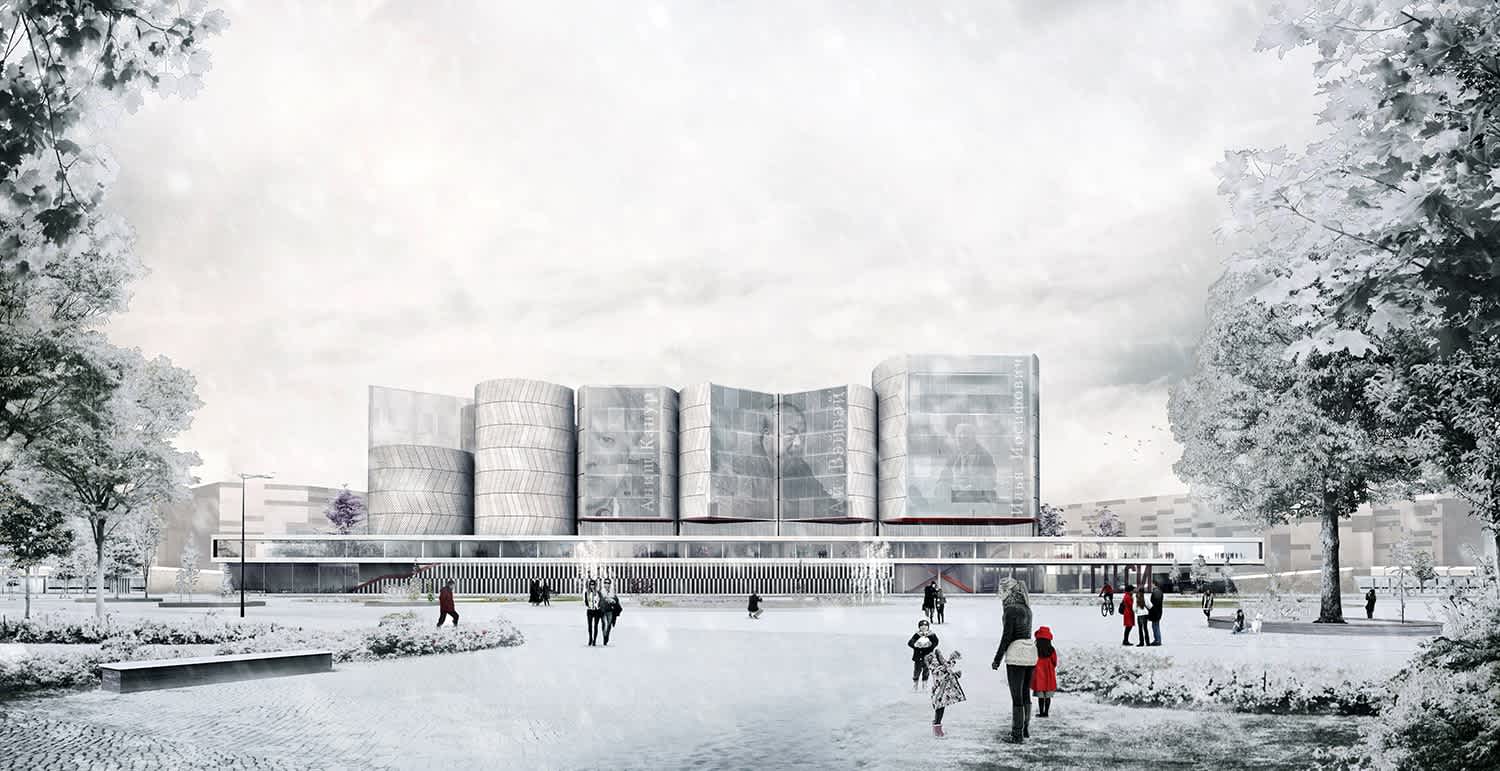 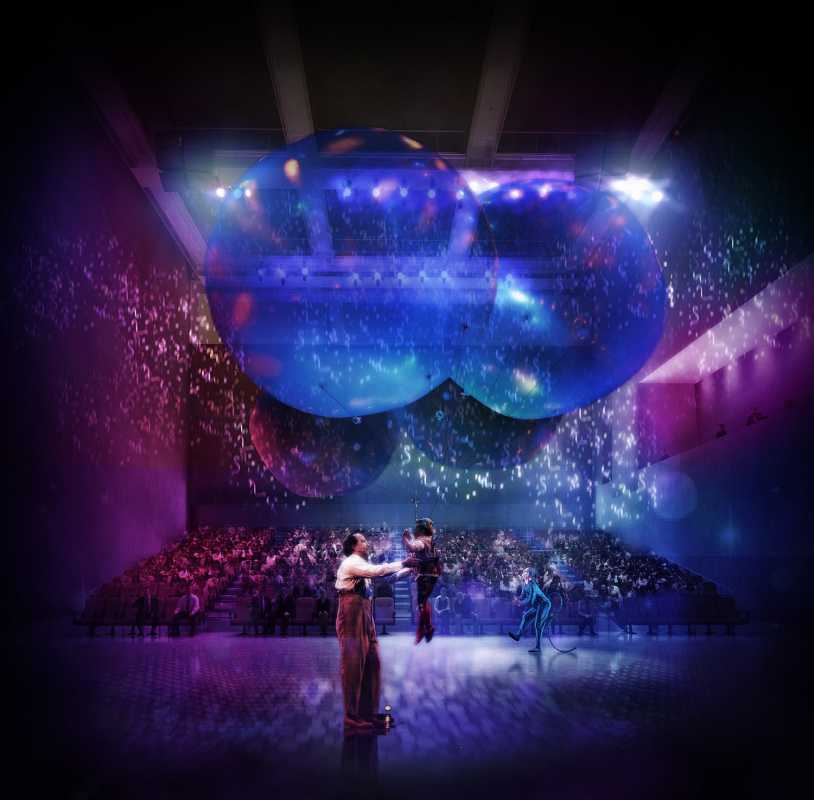 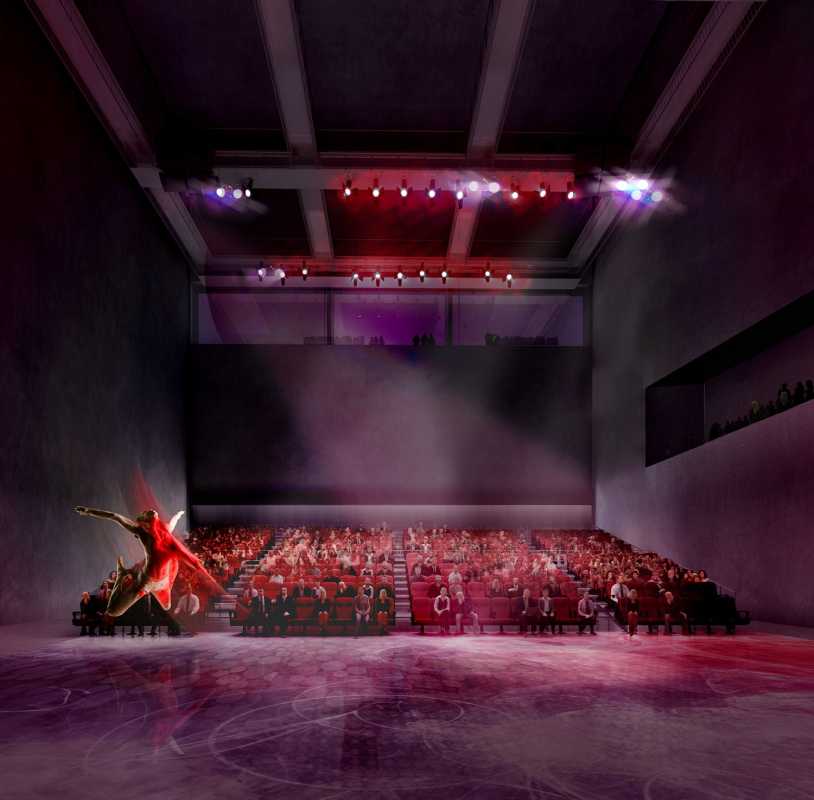 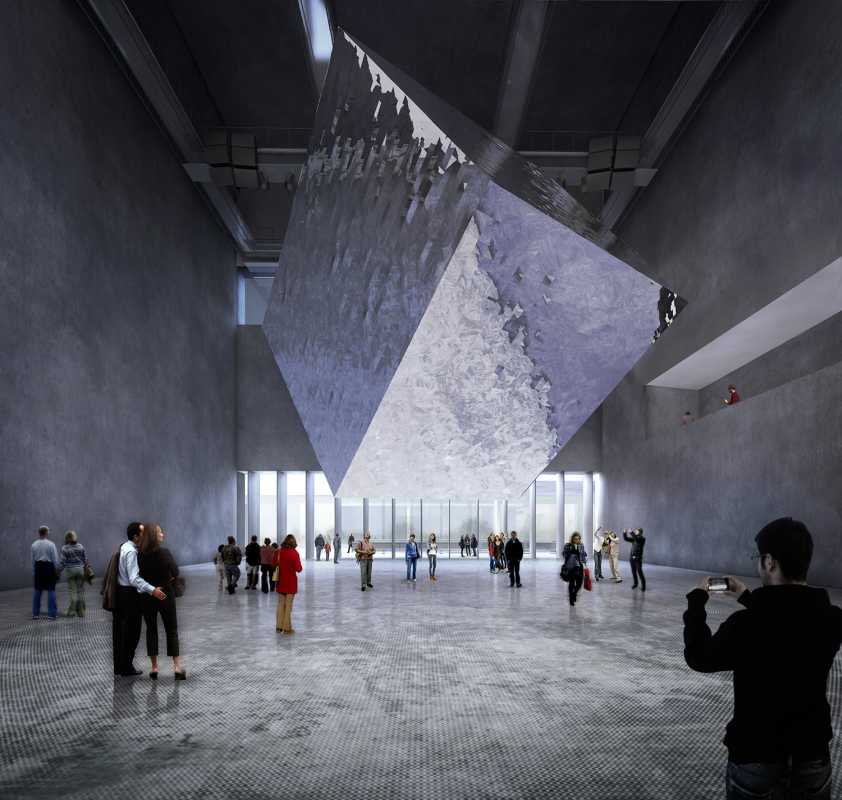 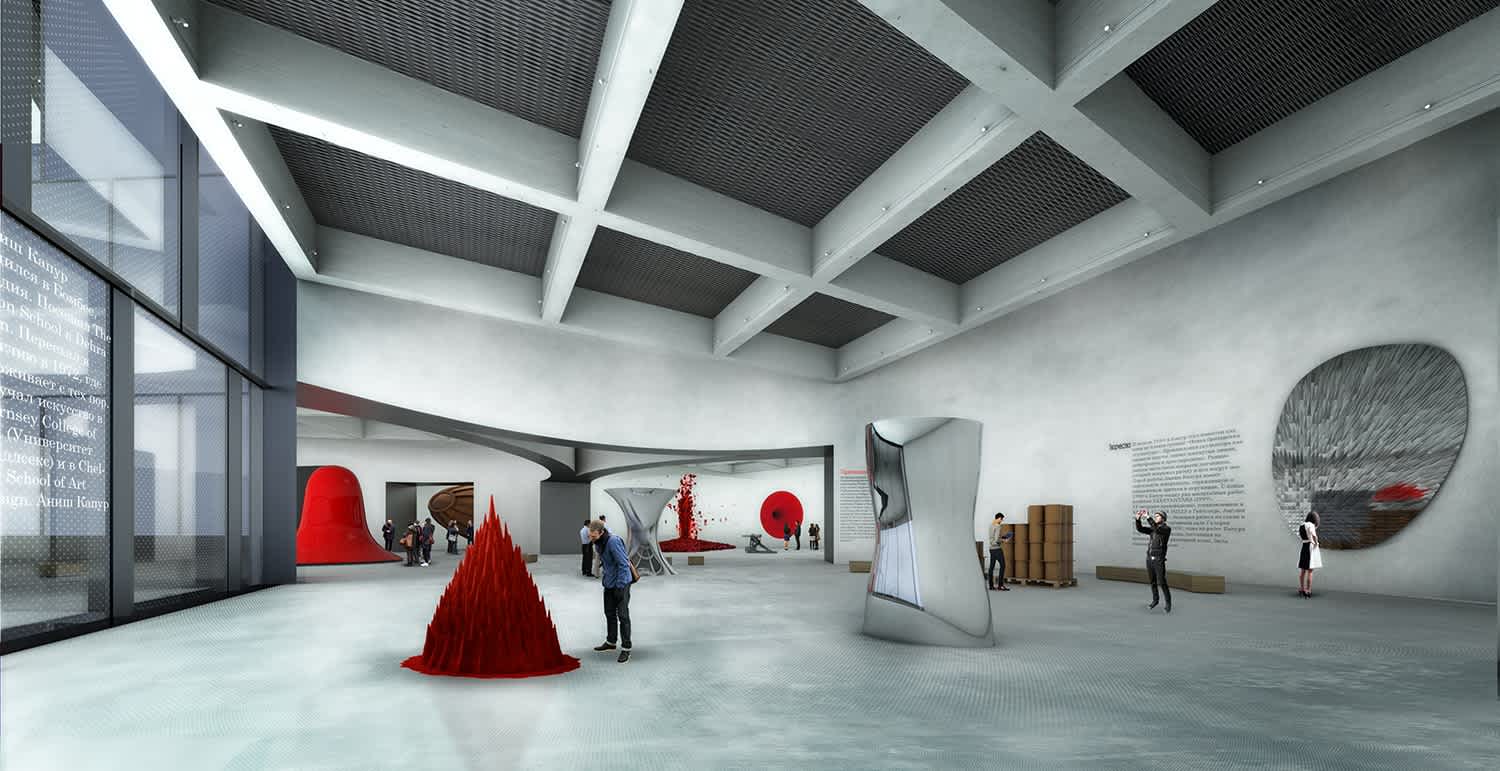 The NCCA evokes and suggests many possibilities within a single space; memories of unbuilt visionary architecture of the Russian avant-garde, powerful industrial structures, and the contemporary art “factory” typology are all notions that define and shape the new proposals. Contrasting to the homogeneity that global civilisation seems to impose, the NCCA aims to embrace the character of the Russian culture, bringing life and movement into a new and upcoming urban area of Moscow. The challenges presented by the complexities of the NCCA brief are first tackled with an elementary combinatorial process that works with a repeated single form and a pattern. Nine cylindrical towers are grouped facing the future park, in front of the very large existing shopping centre that spans along the new long avenue.

A non-hierarchical sequence of exhibition rooms is configured on different levels and heights within these large cultural silos. Whilst the exhibition program is divided vertically, the building sees a radical horizontal cut – a mid-air connection – conceived as a large public interior street. This longitudinal spine will be a gathering place for artists, visitors, experts, researchers, and onlookers; it represents the actual core of the NCCA. The largest volume, situated by the major public entrance, houses the main auditorium. Conceived as a “Black Box”, this versatile platform offers a dramatic setting for theatre performances, conferences, films, and unique audio-visual exhibitions. The striking facade panels facing the park enable media installations that have been specifically conceived for this purpose and context. The NCCA will be a centre for artistic creation, a place for interaction, a lively public space that will encourage the expression and exchange of ideas. The visiting experience will be a unique one, regardless of whether it is to see an installation, access exhibitions, visit the Art Café, spend time in the media library, wait for a performance to begin in the Black Box, or simply look out onto the Khodynskoe park and the city of Moscow.

My process in creating Imaginary Sonic Visions was my response to the amazing design proposal for the New National Centre for Contemporary Arts in Moscow by Nieto Sobejano Arquitectos. I approached these images as though I was creating a sound art design for an actual museum building.

I created an image sequence in Final Cut from the renderings of the museum design and then experimented by placing a series of existing sound sculpture mixes from my recent work with the image sequence. When I then selected which of my works to imagine in the architecture, I wrote captions suggesting how they could be installed.

The Composer + The Architect

Enrique Sobejano has worked as an architect since graduating from the Universidad Politécnica de Madrid and the Graduate School of Architecture and Planning at Columbia University in New York in 1983. He is a professor at the Universität der Künste Berlin (UdK), where he holds the chair of Principles of Design. He has been a visiting critic and lecturer at various international universities worldwide. From 1986 to 1991 he was co-director of the architectural journal ARQUITECTURA, published by the Colegio Oficial de Arquitectos de Madrid. He chairs and participates in international conferences and juries and is a founding partner of Nieto Sobejano Arquitectos. He is a permanent member of the Akademie der Künste Berlin (AdK).

Fuensanta Nieto has worked as an architect since graduating from the Universidad Politécnica de Madrid and the Graduate School of Architecture and Planning at Columbia University in New York in 1983. She is a founding partner of Nieto Sobejano Arquitectos and a professor at the Universidad Europea de Madrid. Fuensanta Nieto lectures on architecture and participates in juries and symposia at various institutions around the world. From 1986 to 1991 she was co-director of the architectural journal ARQUITECTURA, published by the Colegio Oficial de Arquitectos de Madrid.

Nieto Sobejano Arquitectos was founded in 1985 by Fuensanta Nieto and Enrique Sobejano and has offices in Madrid and Berlin. Along with being widely published in international magazines and books, the firm’s work has been exhibited at the Biennale di Venezia in 2000, 2002, 2006, and 2012, at the Museum of Modern Art (MoMA), New York, in 2006, at the Kunsthaus in Graz in 2008 and at the MAST Foundation in Bologna in 2014. They are the recipients of the 2007 National Prize for Conservation and Restoration of Cultural Heritage and the 2010 Nike Prize issued by the Bund Deutscher Architekten (BDA), as well as the Aga Khan Award for Architecture (2010), the Piranesi Prix de Rome (2011), the European Museum of the Year Award (2012), the Hannes Meyer Prize (2012), AIA Honorary Fellowship (2015), the Alvar Aalto Medal (2015) and Gold Medal of Merit in the Fine Arts in 2017. Their major works include the Madinat al-Zahra Museum, the Moritzburg Museum, the San Telmo Museum, the Zaragoza Congress Centre, the Joanneum extension in Graz, the Contemporary Art Centre in Córdoba and the Arvo Pärt Centre in Estonia. Nieto Sobejano Arquitectos currently have projects in Germany, Spain, Austria, Morocco, China, United Kingdom and France. Three monographs have been recently published on their work: "Nieto Sobejano. Memory and Invention" (Hatje Cantz Verlag, Ostfildern, Germany, 2013), "Fuensanta Nieto, Enrique Sobejano. Architetture" (Mondadori Electa Spa, Milano, Italy, 2014) and "Nieto Sobejano Arquitectura 2004-2017" (TC Cuadernos 131/132, Valencia, Spain, 2017).

Bill Fontana (born Cleveland, Ohio, 1947) is an American composer and media artist living in San Francisco, who has developed an international reputation for his pioneering experiments in sound. Since the early 1970s, Fontana has used sound as a sculptural medium to interact with and transform our perceptions of visual and architectural spaces. After studying philosophy and music at the New School for Social Research in New York and the Cleveland Institute of Music, Fontana has created sound sculptures and radio projects for museums and broadcast organisations around the world. He has received fellowships from the Guggenheim Foundation, the National Endowment for the Arts, the Berliner Künstler Programm of the DAAD, and the Arts Council of England.

His work has been exhibited at the Whitney Museum of American Art, the San Francisco Museum of Modern Art, the Museum Ludwig in Cologne, the Post Museum in Frankfurt, the Art History and Natural History Museums in Vienna, Tate Modern and Tate Britain in London, the 48th Venice Biennale, the National Gallery of Victoria in Melbourne, the Art Gallery of New South Wales in Sydney, MAXXI in Rome, and MAAT in Lisbon, and the 2018 Venice Architecture Biennale.. He has done major radio sound art projects for the BBC, the European Broadcast Union, the Australian Broadcasting Corporation, National Public Radio, West German Radio (WDR), Swedish Radio, Radio France and the Austrian State Radio. He currently has a major exhibition in Kunsthaus Graz, Austria.

“I began my career as a composer. What really began to interest me was not so much the music that I could write but the states of mind I would experience when I felt musical enough to compose. In those moments, when I became musical, all the sounds around me also became musical.” — Bill Fontana